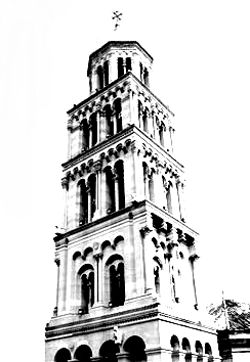 "DALMATINO" IN HINTERLAND OF THE RHINE
The spirit of city of Split near Cologne - Herkenrath, 2007.

...And the closing in the form of passionate performance under the alter of St. Nicholas' catholic church in Herkenrath once again has put the numerous audience on the feet. For four times City of Split chorus Brodosplit returned to the stage, and in the end of the concert they were rewarded with the standing ovations of the audience...
...The thrill of the visitors, numerous Germans and Croatian immigrants, was endless and it is not a surprise that the women liked the concert of "robust lads" the most. Here are some impressions: "I liked it all, and Zrinjski has fascinated me.", "I'm so thrilled I can't speak. Excellent! Of course that I liked Stipišić's Dalmatino, but Sinj's folk singing was also phenomenal.", "What an engagement, what a harmonious singing, with a body enthusiasm.", "It was delightful. Touching. At the end, my eyes were wet from emotions.", "And I especially liked that so many lads are singing in the chorus."...